The Bellevue Collection isn’t just another development or business venture. I live here and work here – it’s my home!” 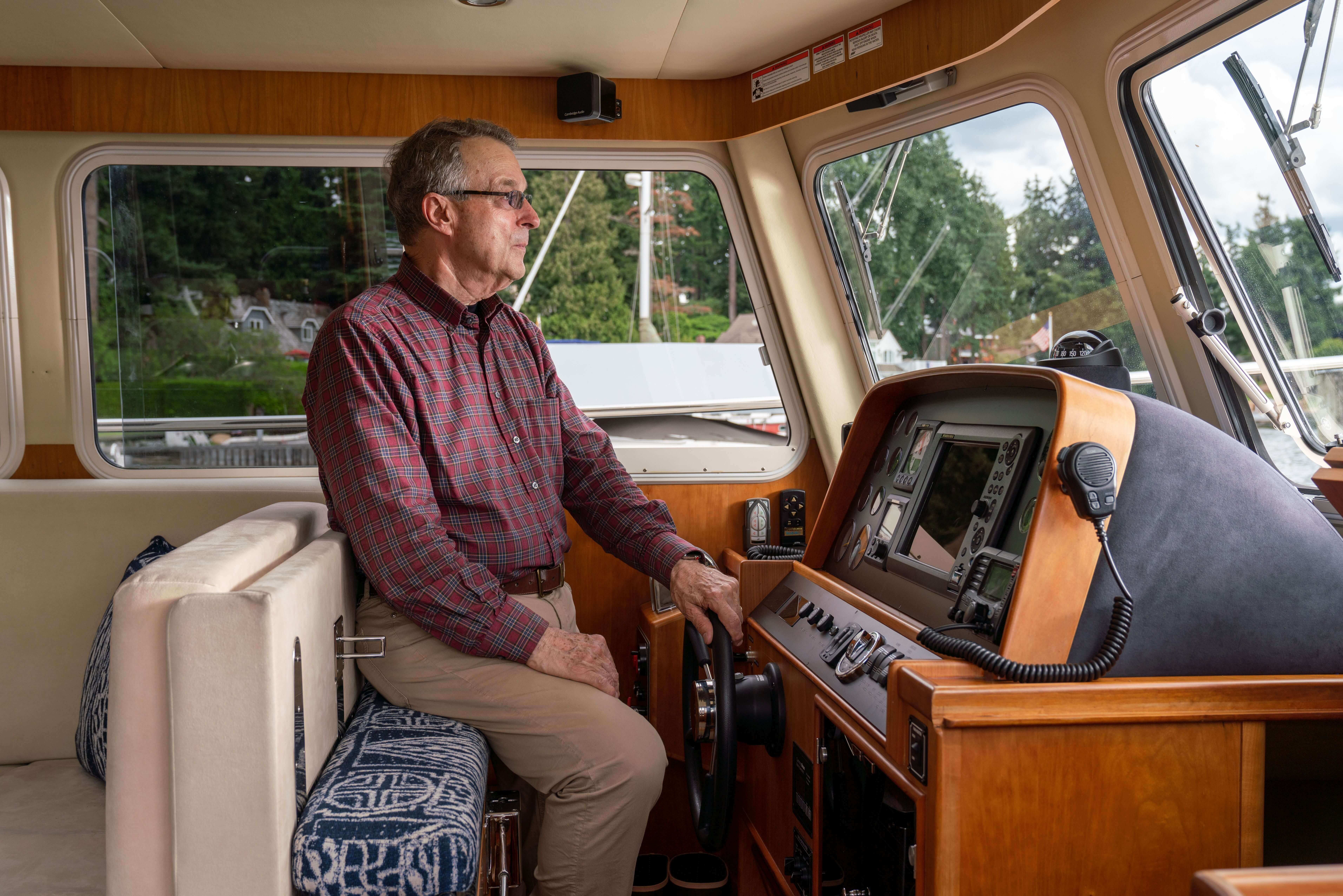 The Eastside is basically where I’ve lived almost all my life. Bellevue didn’t even become a city until 1953…so if anything was to be done, it was simply neighbors getting together to make the Eastside a better place. ” — Kemper

Kemper Freeman is a third-generation resident of Bellevue, Washington. He is principal owner and hands-on leader of Kemper Development Company, which has played an important role in Bellevue’s growth from the early days of downtown to the economic force the city is today.

In all, Kemper has developed a total of 5.5 million square feet of Washington State real estate and manages The Bellevue Collection, comprised of the well-known Bellevue Square, Bellevue Place, and Lincoln Square. The Puget Sound Business Journal says “it would be hard to overstate Freeman’s impact on the Eastside.”

Yet despite his business successes, Kemper says he would rather be operating a tractor than sitting in a board meeting. His first taste of hard work came as a nine-year-old living in Bellevue. He earned 50 cents an hour running a tractor on a dairy farm located at the site of today’s Marymoor Park.

It was there [the farm] that I learned everything you need to do whatever you want to do is at hand. It’s right there in front of you, just look for it.”
— Kemper

Kemper worked farms with his own tractor for the next two decades while also taking on the role of manager for local radio station KFKF.

Best known as a businessman, Kemper is also a community builder and strong supporter of transportation policies he believes will benefit the City of Bellevue and the Seattle region. His involvement comes from a long family line of community advocacy. His grandfather, Miller Freeman, pushed for improved Seattle area transportation as early as 1910 through the creation of the Fishermen’s Terminal. He also advocated strongly for the first bridge constructed to connect Seattle to Bellevue. Kemper Freeman, Sr., Kemper’s father, was the leader in creating the first school district and hospital in Bellevue. In 1972, Kemper went to work for those in Bellevue by serving two terms in the Washington State House of Representatives.

Though he went on to build one of the nation’s most successful shopping centers – Bellevue Square – Kemper today focuses an estimated 30 percent of his awake time not on his own buildings, but on community building. In addition to his support for expanding health and education opportunities and the arts, he is a strong promoter of smart, cost-effective transportation growth between Seattle and Bellevue.

His focus on building Bellevue is perhaps best exemplified by The Bellevue Collection, transformed by Kemper from a once sleepy part of town into a vibrant mixed-use shopping and entertainment center that has brought the best to the Eastside. Kemper’s insistence on the creation of more than 10,000 free parking spaces for The Bellevue Collection has helped ensure its access to all of the Seattle region.

Kemper is a past Chairman of the International Council of Shopping Centers and the association’s Government Relations Committee, and has served as a Trustee since 1987. He serves as a Board Member of Overlake Medical Center and the Performing Arts Center Eastside. Kemper is also an avid Rotarian, having never missed a monthly meeting somewhere in the country.

Kemper Freeman attributes his life successes to the guiding set of values passed down from previous generations of Freemans and to the strength he receives daily from his wife Betty and daughters Suzy and Amy. Married for more than 55 years, Kemper and Betty have raised their daughters to value a strong work ethic and commitment to family.

Kemper and Betty on How They Met:

Kemper and Betty at Fashion Week at The Bellevue Collection

“Once I got back to town from a post college Europe trip for the summer, I called Betty Austin and invited her to go skiing,” Kemper recalls.

“He assumed that because I was from Colorado, I knew how to ski — I didn’t,” says Betty. “But I skied the whole day and wound up in the hospital with a sprained ankle.”

The couple soon discovered that “we had the same likes and dislikes. Our ethics are the same,” says Kemper. “She’s stubborn. She’ll hold on to her point. We are both pretty good at that. There were times when I would pick her up and we would get into a discussion about where we would go for dinner. When we wouldn’t agree, it would get to a point where we thought maybe we shouldn’t continue the date.”

Betty and Kemper were married on December 8,1965, at the First Congregational Church in Bellevue.

Kemper and Betty on Raising a Family:

It was soon time for Kemper and Betty to start a family. In 1968, Suzy was born, followed four years later by Amy.

“When we were first married, we struggled like everyone else,” Betty recalled. “Kemper was making $300 a month, and it took us more than a year to pay the hospital bills for Suzy.”

Both daughters, like their father, were exposed to the business at an early age. Suzy joined the business in 1991 and Amy joined Suzy in leasing in 1993. Suzy has two children, Kemper McQuaid who joined the company in 2019 and Sperry McQuaid. Amy married Kevin Schreck, a top sales associate in the exploding mobile phone industry who later joined the Kemper Development team as a vice president in leasing and now is a senior vice president. Amy and Kevin have three children, Margo, Mason and Grant Schreck.

“From the beginning, Betty and I told the girls that it would be a mistake to assume that the trust is worth anything, because in this business things can change,” Kemper says. “We’ve told them not to set their life thinking that the trust is there and that they’re all done. We have always wanted them to prepare their lives however they want—to be glad that they finished school and became employable.”

Kemper believes the common thread among all the generations of Freemans “is that we are driven by the market, not by other external ideas. We try to get real estate to respond to the needs of the market.”

Content on the biography of Kemper Freeman and the Freeman Family history in Bellevue can be found in the book “Generations” by Robert Spector. 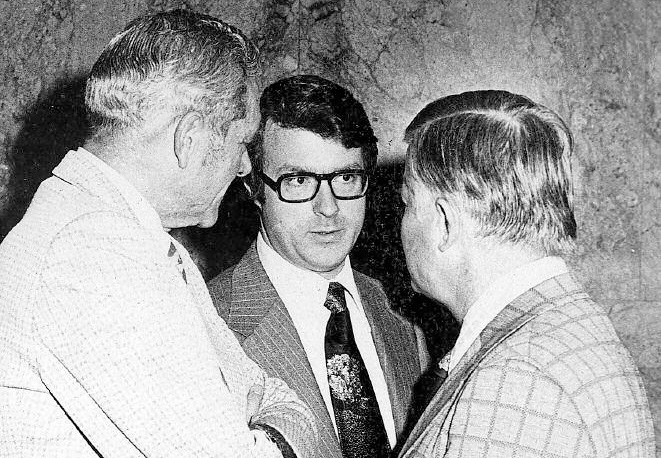 In 1972, Freeman was asked to run for the open seat for the 48th District. Competing with over a dozen candidates, he ultimately became the first choice. Freeman ran for the second term and became the youngest legislator in the Republican leadership. 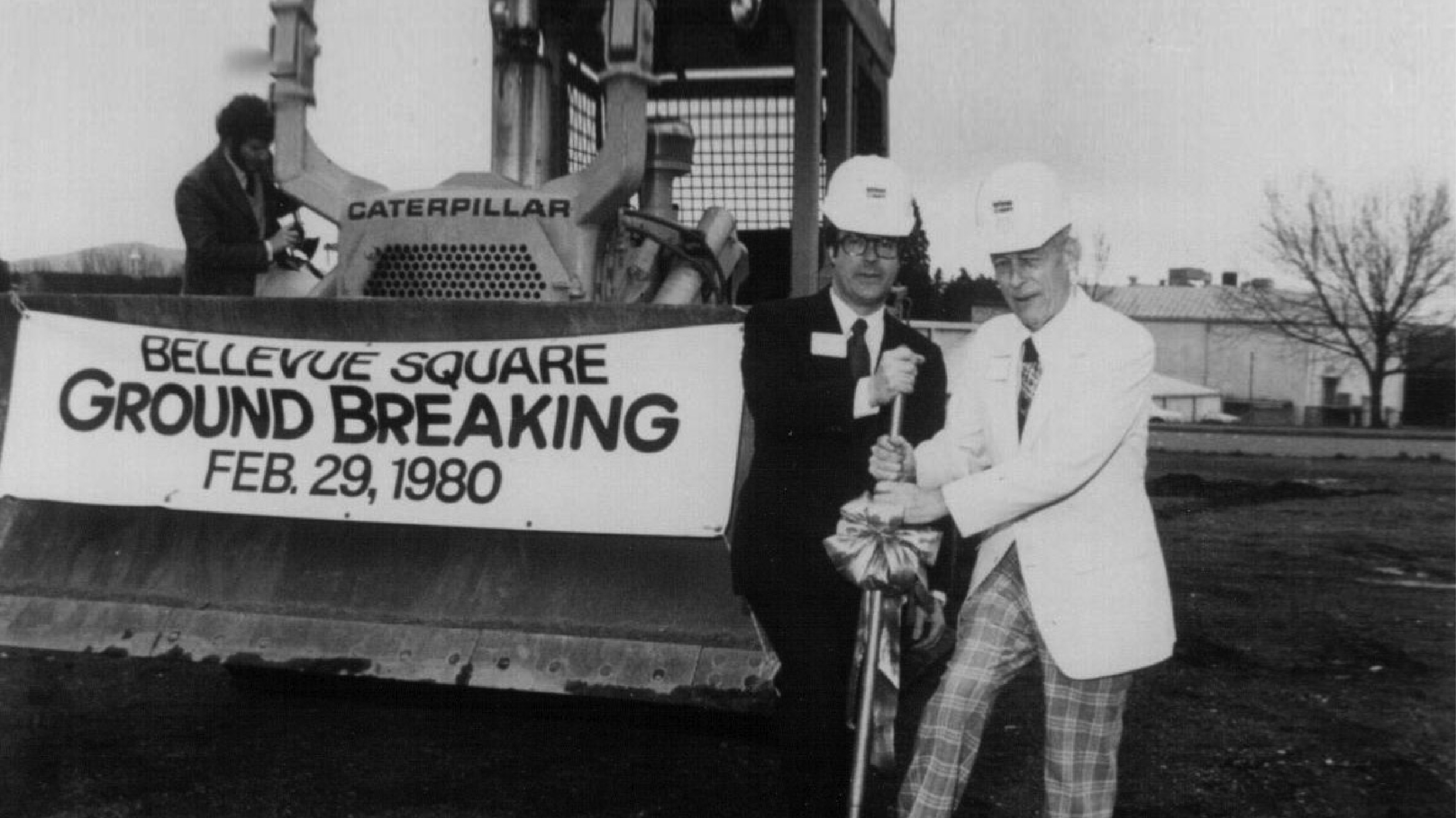 In 1980 Kemper and his father break ground on the redevelopment of Bellevue Square for an outdoor community center to the and indoor multi-level super regional shopping center.

The story of The Bellevue Collection is a story about the vision and commitment of the Freeman family. 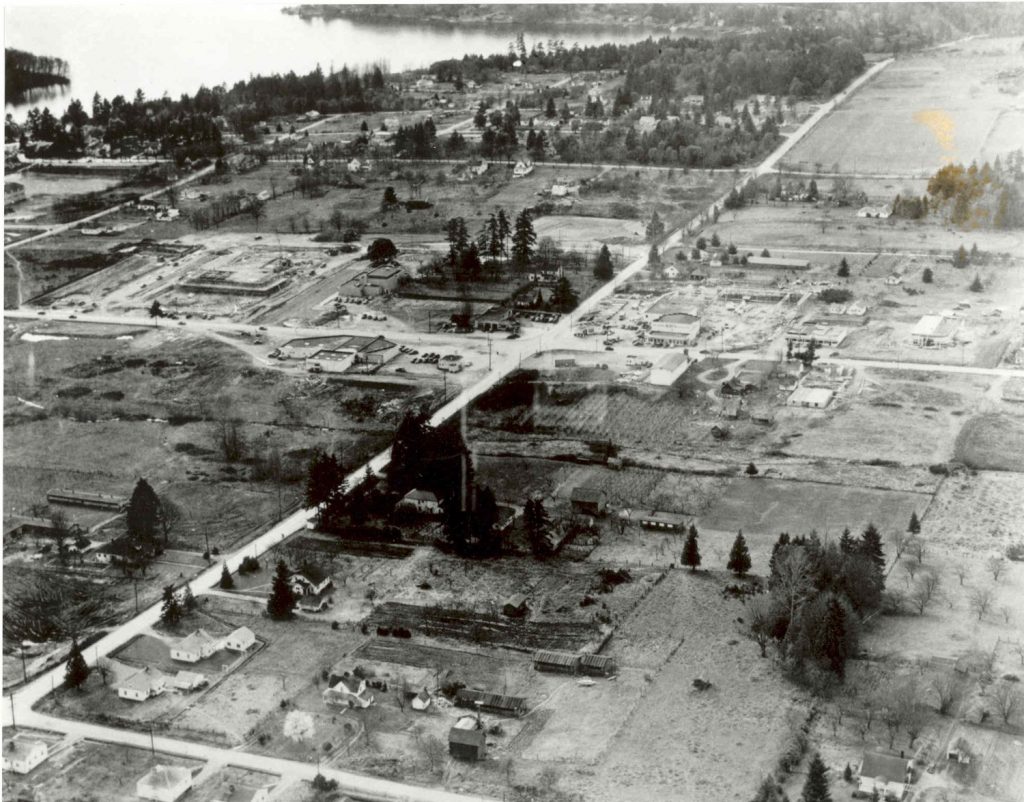 It begins with Kemper Freeman Sr., who developed Bellevue Shopping Square, as it was first known, with the help of a professional planner and a ten-cent booklet of demographic and civic development statistics as a guide. Then in 1945, Freeman found shopping centers that had been designed with a new generation of automobile-oriented shoppers in mind. The 10-acre tract of land where the current Bellevue Square sits, fronting on 104th Avenue N.E. just south of N.E. 8th Street, was purchased by Kemper Freeman Sr. from James Ditty, who had originally acquired the land in the late 1920s. 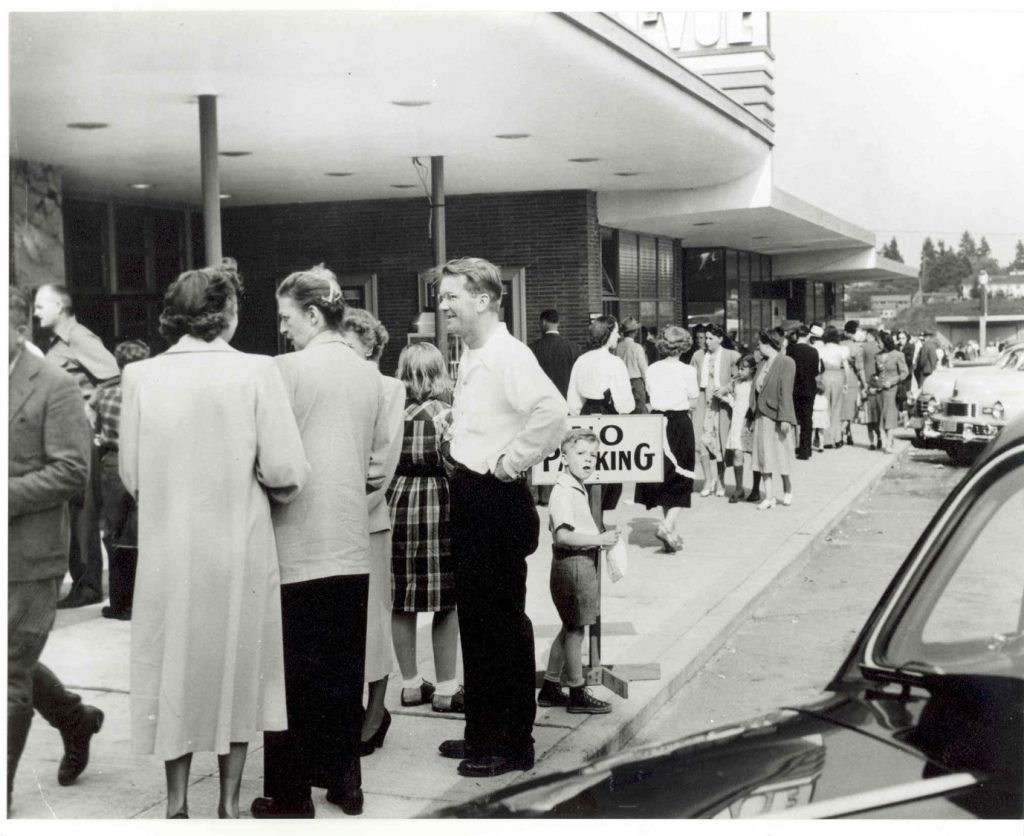 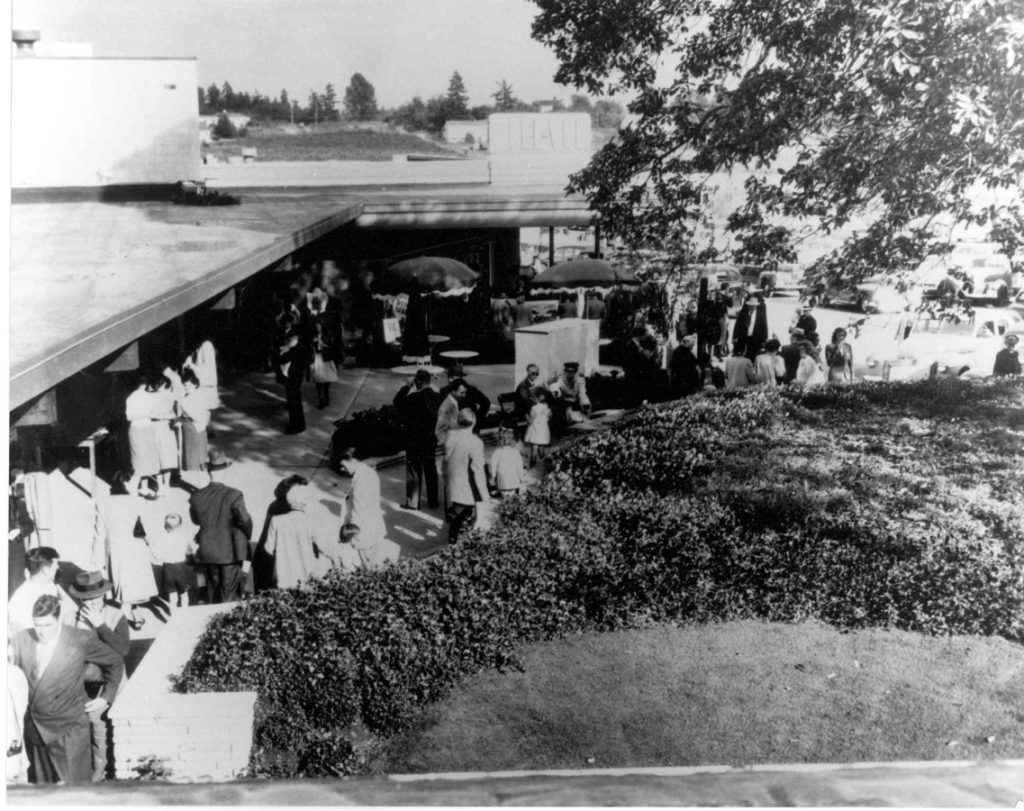 The Bellevue Museum’s Arts Fair got its start at the Crabapple restaurant in the open-air Bellevue Shopping Square  in 1946. 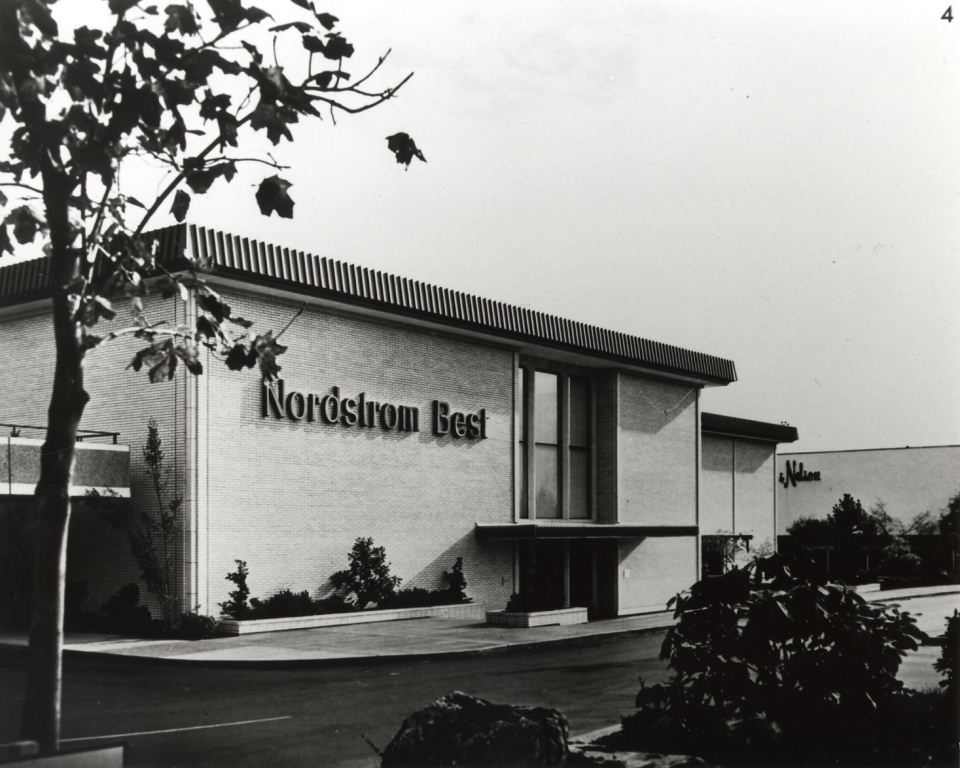 By the close of the decade, Bellevue Square had grown to 45 stores. Nordstrom, then a local shoe store, added apparel and became the third major anchor in 1966. 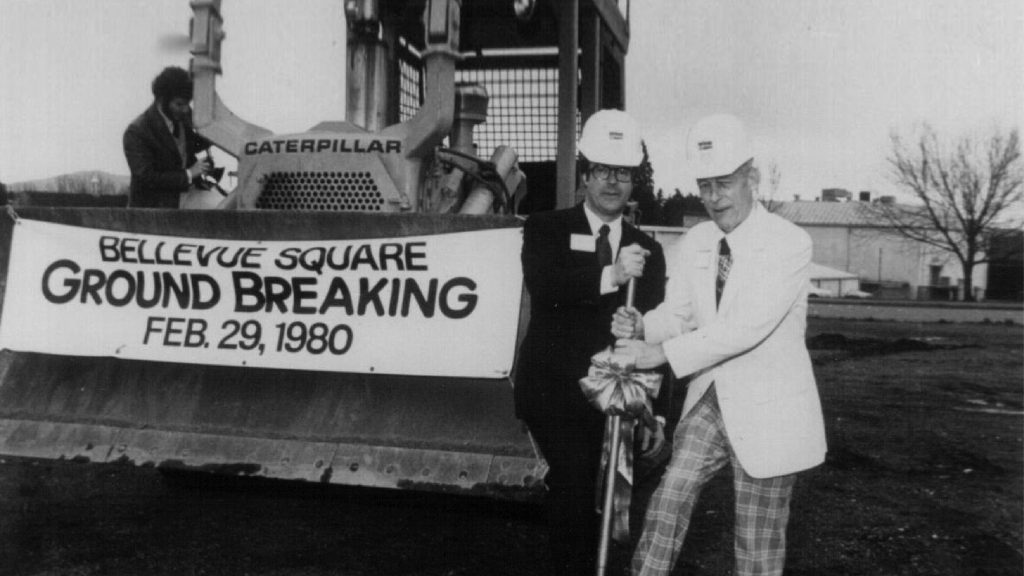 The 1980s marked a significant visionary reconstruction period for Bellevue Square at the hands of Kemper Freeman, Jr. Bellevue Square went from a one-level, open-air shopping center to a multi-level, enclosed super regional center more than one million square feet in size. 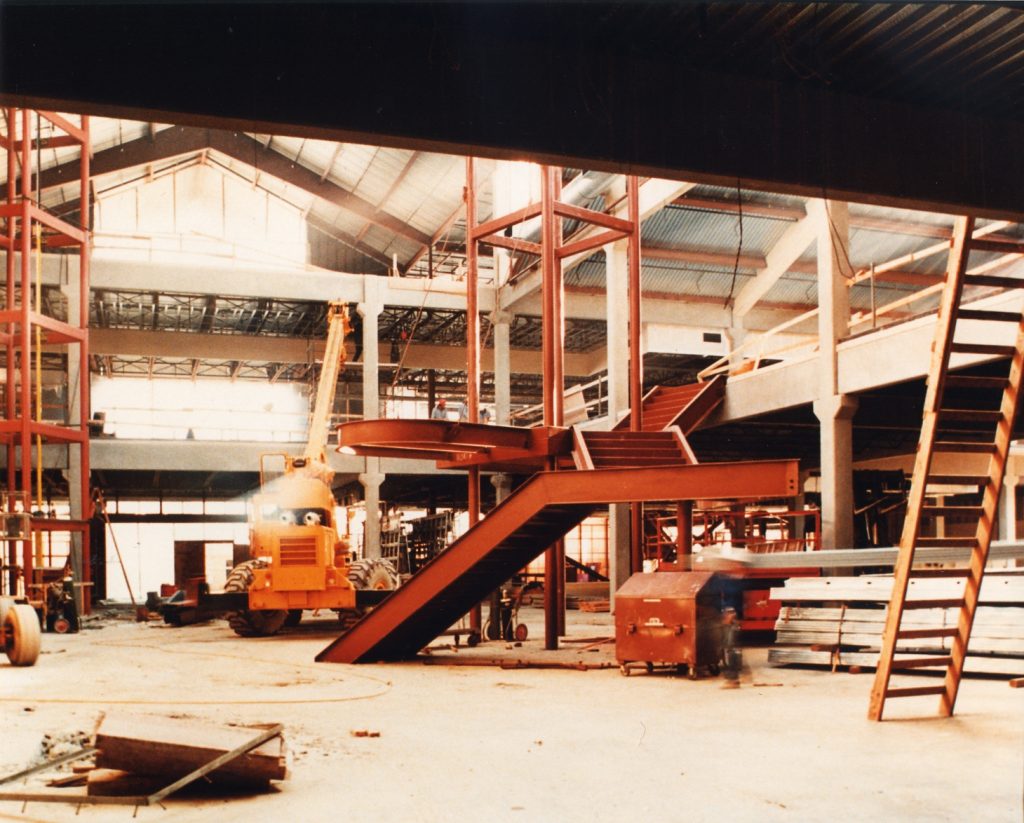 Construction is finally underway to convert to an enclosed two-level shopping center. Tenants were successfully kept open during the process. 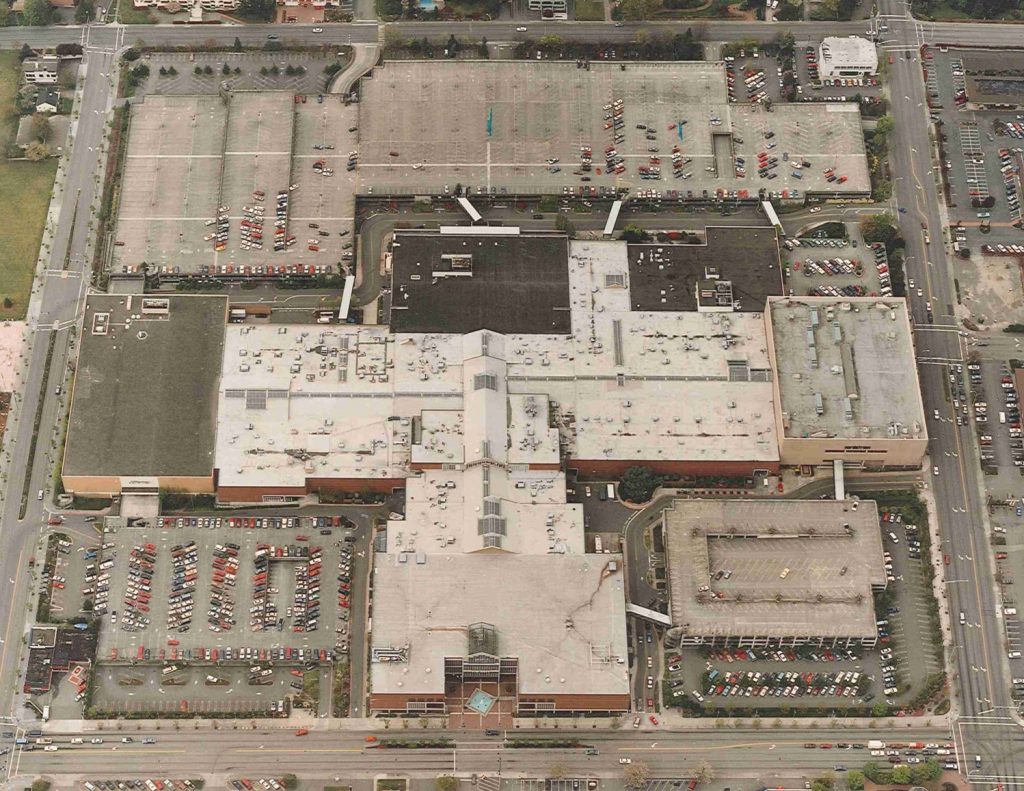 Bellevue Square completes its expansion from an open air center to 1 million square feet including the addition of the Bon Marche to its already powerful anchored tenant mix of Nordstrom, JCPenney and Fredrick & Nelson. 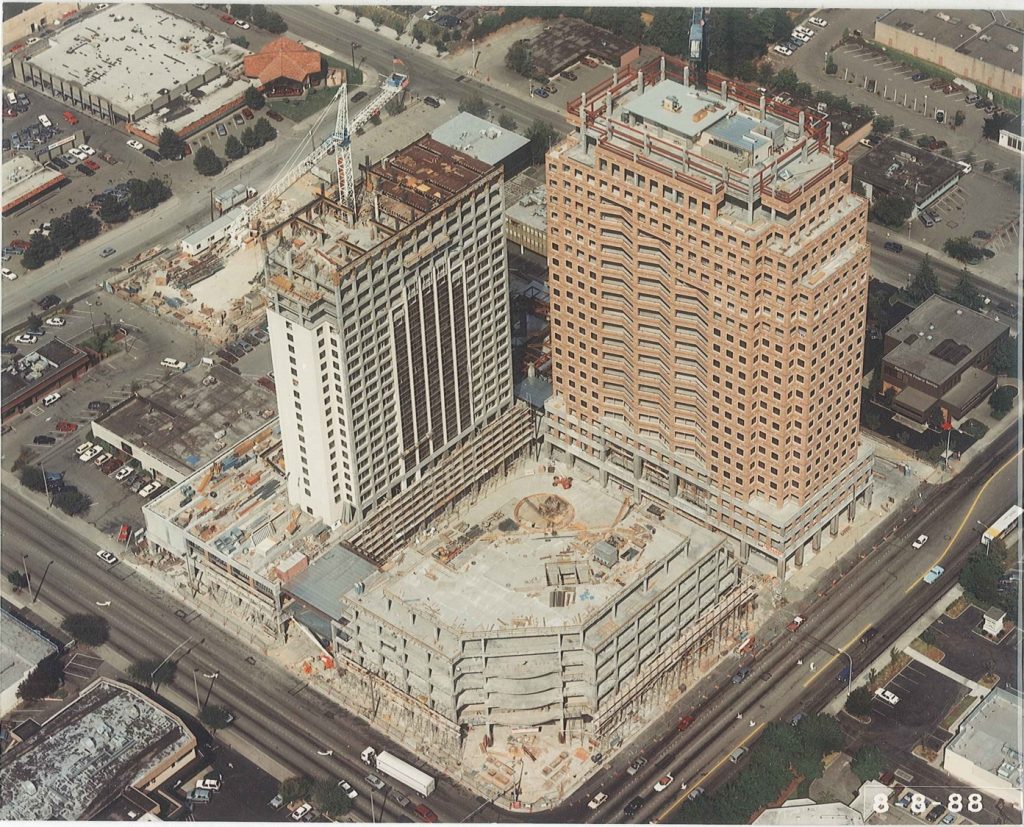 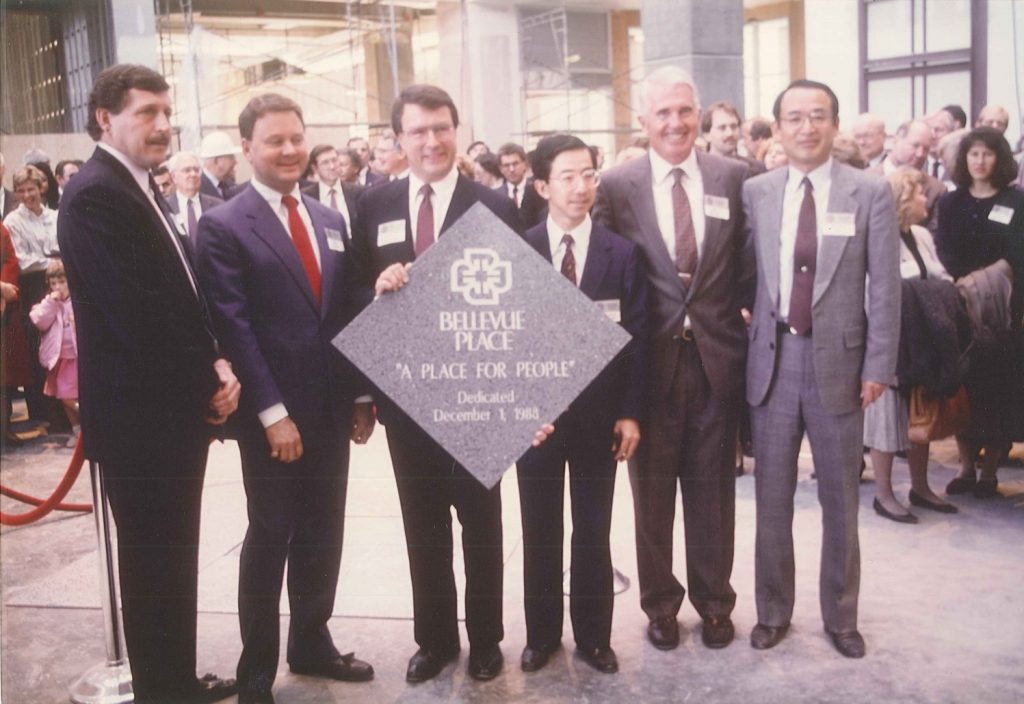 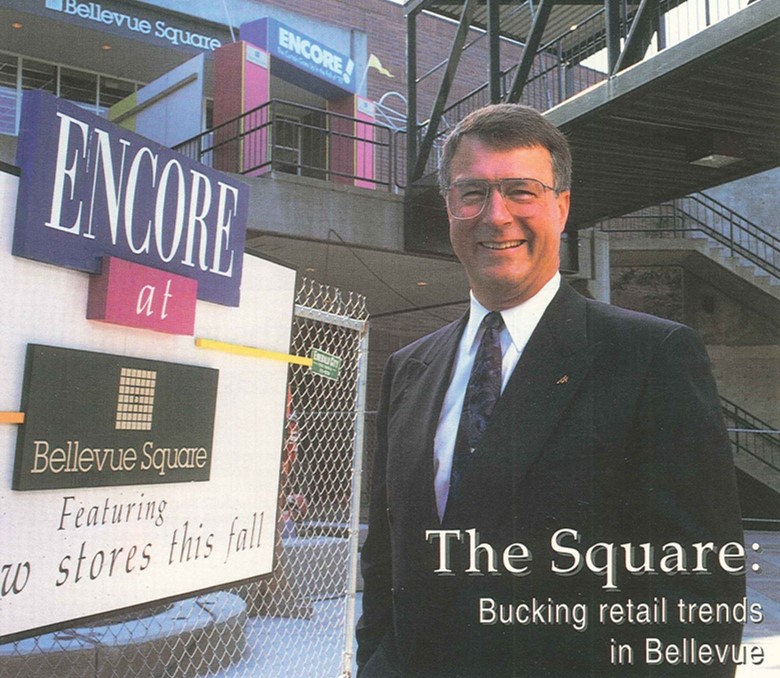 Frederick & Nelson falls into bankruptcy – 175,000 sf. Kemper Freeman takes the risk and converts the anchor space into 50+ specialty stores and influences the future direction of Bellevue Square with first to market stores. 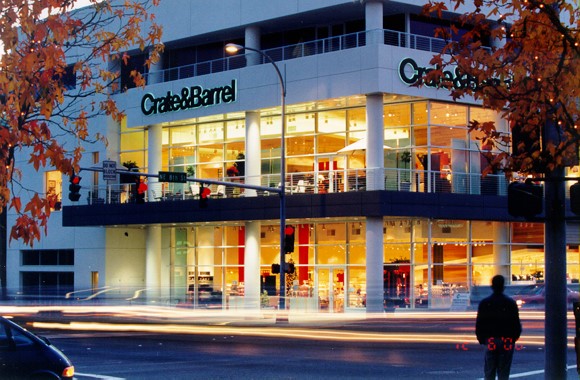 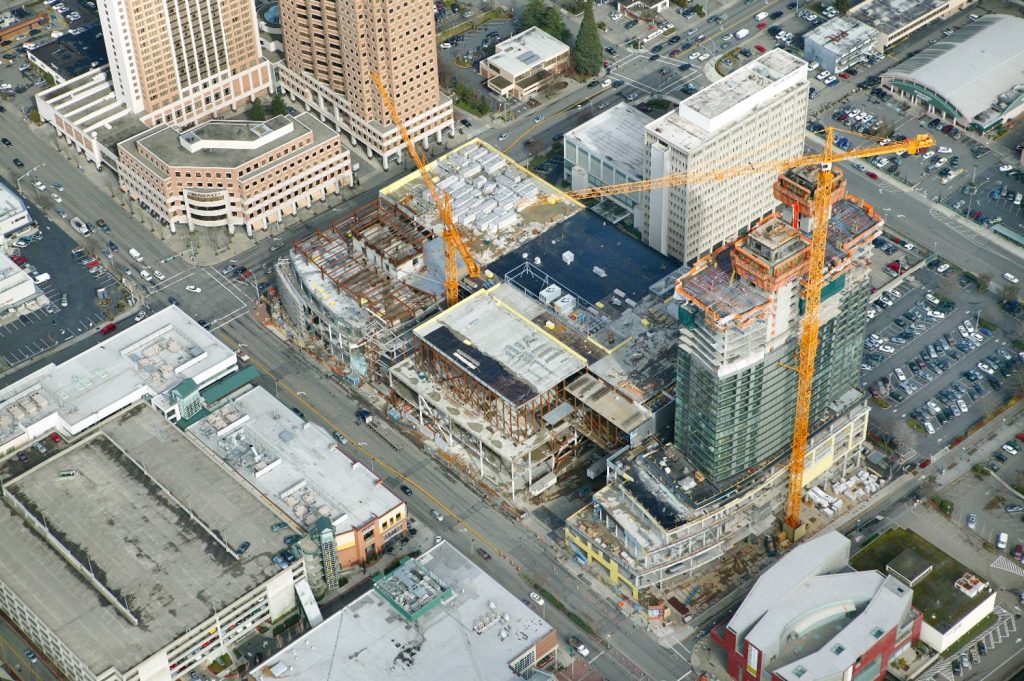 With the addition of Lincoln Square, Freeman pioneered the true mixed-use category and the development of both phases of Lincoln Square launched a successful restaurant and entertainment district, two additional hotels, office and high end residential. Kemper Freeman and the Freeman family remain highly involved with the everyday operations of The Bellevue Collection. Freeman’s vision continues to guide its growth as the epicenter of the booming Eastside and the pulse of the Northwest. 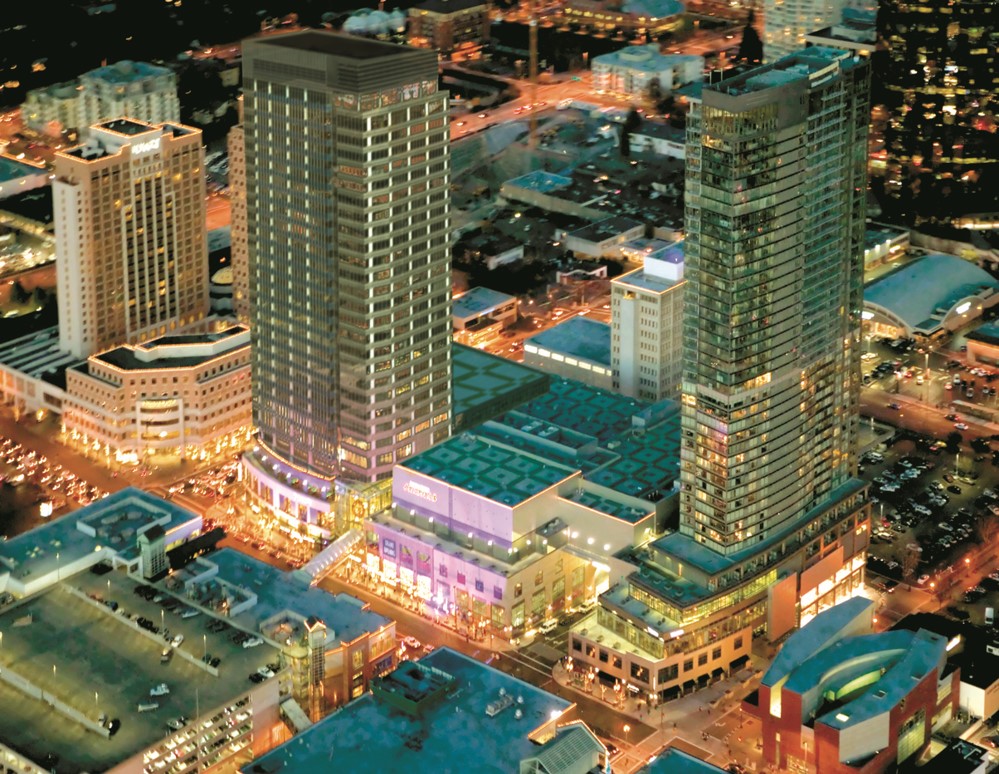 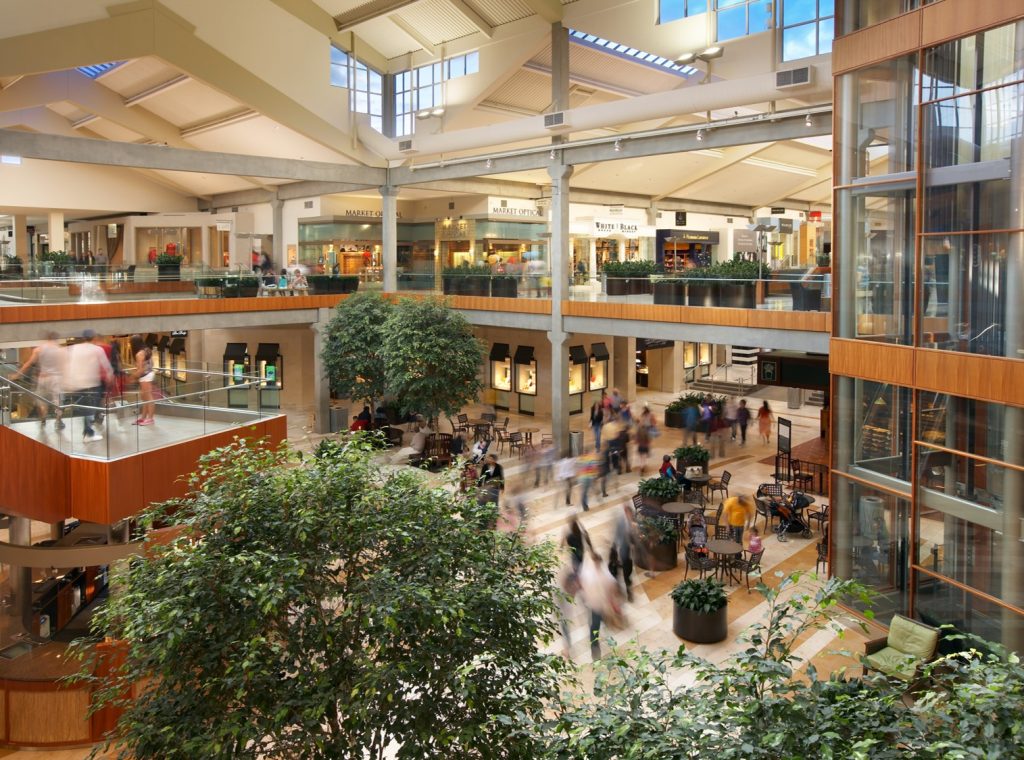 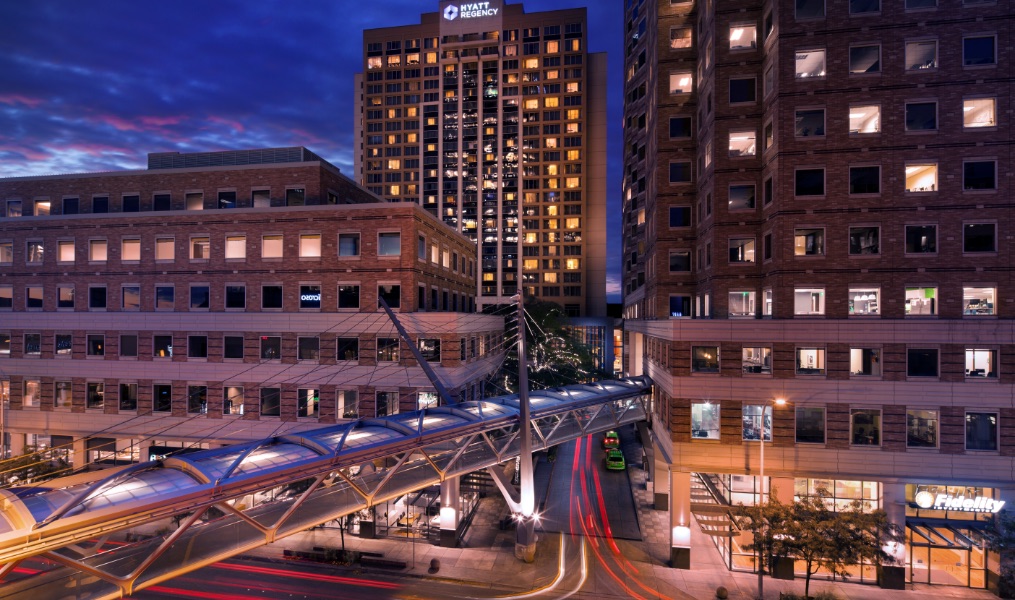 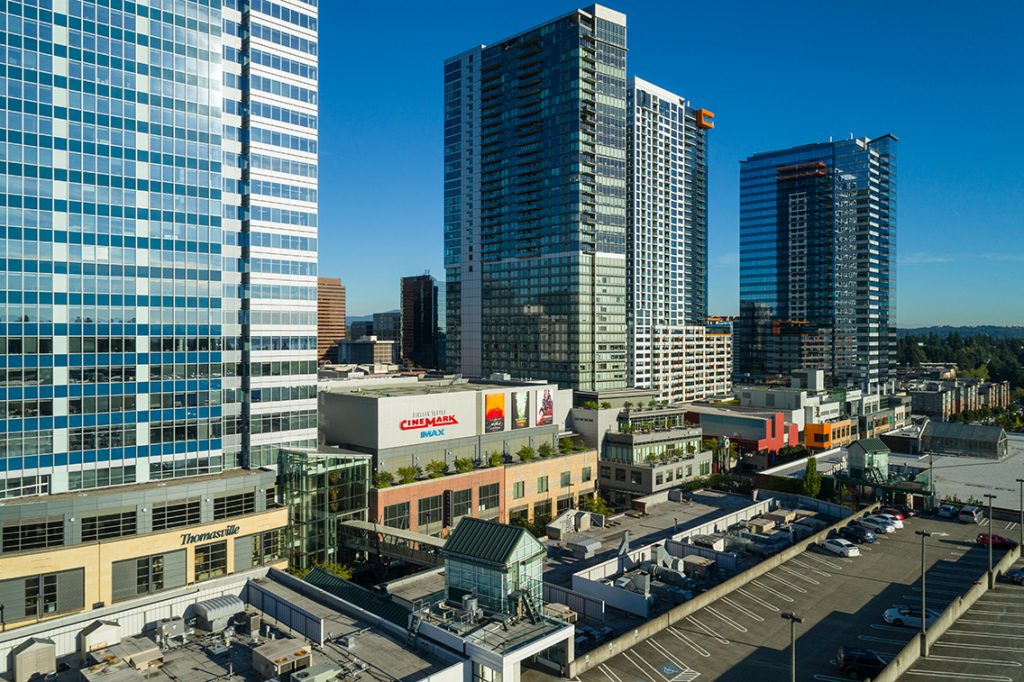 During the first quarter of 2017 Lincoln Square South first tenants moved into their space including 1.7 million square feet class A office space, 170,000 square feet of destination dining and entertainment retail and The luxury W Bellevue Hotel. 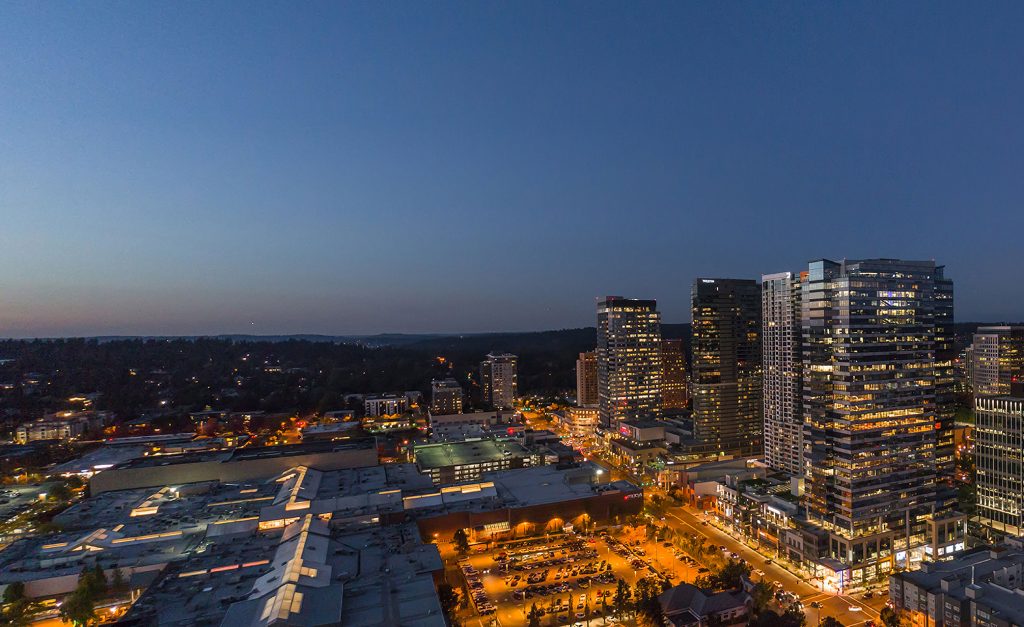 The Freeman family remains highly involved with the everyday operations of The Bellevue Collection. The family’s vision continues to guide its growth and lead its status as the epicenter of the booming Eastside and the Pulse of the New Northwest with its 5.5 million sf footprint. 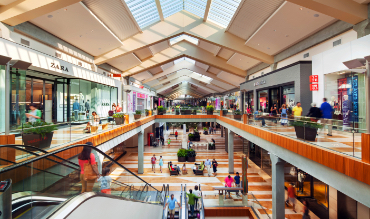 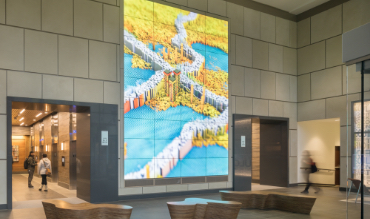 Anchoring an entire block of The Collection, Bellevue Place offers immediate connections to a variety of restaurants, nightlife, entertainment, galleries & personal services and is the future home of the Performing Arts Center Eastside.